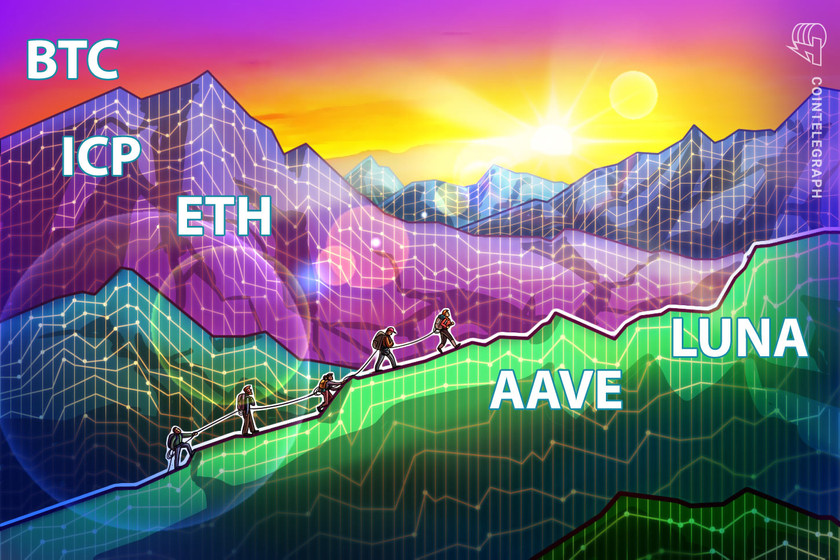 ETH, ICP, AAVE and LUNA could rally higher over the coming days if BTC funds support above the 50-day moving average.

Bitcoin’s (BTC) recovery is facing stiff resistance near the $35,000 mark but Bloomberg Intelligence senior commodity strategist Mike McGlone remains bullish. In his latest analysis, McGlone said that the probability of Bitcoin hitting $60,000 is greater than the price dropping to $20,000.

Institutional investors seem to be using the weakness in Bitcoin to build their positions. Cathie Wood’s Ark Invest added more than 450,000 shares of Grayscale Bitcoin Trust in two separate buys in the past week, increasing their holdings to more than 9 million shares. In addition, Edge Wealth Management and Rothschild Investment Corp also added GBTC shares to their portfolio.

However, not everyone is so bullish on Bitcoin. Analysts at Delphi Digital have pointed out that Bitcoin is testing the support at the 12-month moving average and a break below it could result in further downside. Kevin Kelly, a certified financial analyst at Delphi Digital, said a break below $30,000 could prove to be bearish for Bitcoin.

If Bitcoin remains range-bound, traders are likely to shift their focus on select altcoins, which may surprise to the upside. Let’s study the charts of the top-5 cryptocurrencies that may continue to attract buying interest in the short term.

If buyers succeed, the BTC/USDT pair could challenge the critical short-term resistance at $36,670. A breakout of this resistance could attract further buying, clearing the path for a possible rally to the $41,330 to $42,451.67 resistance zone.

The 20-day EMA has started to turn up and the relative strength index (RSI) has risen above 54, indicating a minor advantage to the bulls.

If the price turns down from the 50-day SMA but rebounds off the 20-day EMA, it will suggest that the sentiment has turned bullish. The buyers will then make one more attempt to clear the hurdle at the 50-day SMA.

Alternatively, a break below the 20-day EMA will indicate that bears continue to sell at higher levels. The pair could then retest the support at $31,000.

The 4-hour chart shows that bears are aggressively defending the overhead resistance near $35,000. The pair could now drop to the 20-EMA where buyers are likely to step in. If the price rebounds off the 20-EMA, it will suggest that the short-term sentiment has turned bullish.

The buyers will then again try to clear the hurdle at $35,000. If they succeed, the pair could rally to $36,670 where bears may again pose a still challenge. If the bulls do not give up much ground from this resistance, it will suggest that short-term traders are not booking profits at this level.

This will improve the likelihood of a break above $36,670. This bullish view will invalidate if the price turns down and breaks below the 20-EMA.

Ether (ETH) reached the 50-day SMA ($2,165), which is likely to act as a strong hurdle because the bears had stalled the previous rally at this resistance on July 7.

If the price turns down from the current level but finds support at the 20-day EMA ($2,046), it will suggest that the sentiment has turned bullish. A strong rebound off the 20-day EMA will enhance the prospects of a breakout of the 50-day SMA.

If that happens, the bulls will try to push the price to the downtrend line. A breakout and close above this resistance will signal a possible change in trend. The gradually rising 20-day EMA and the RSI above the midpoint suggest a strong comeback from buyers.

Contrary to this assumption, if bears pull the price below the 20-day EMA, it will suggest that bears are in no mood to relent. The pair could then plummet to the strong support at $1,728.74.

The bears are aggressively defending the psychological level at $2,200. The pair could now correct to the 20-EMA where the buyers may step in. If the price rebounds off the 20-EMA, the bulls will make one more attempt to push the pair above $2,200.

A breakout and close above this overhead resistance will open the doors for a possible rally to $2,400. Contrary to this assumption, if bears pull the price below the 20-EMA, the decline could extend to the $2,000 support. A break below the 50-SMA could result in a decline to $1,728.74.

Internet Computer (ICP) dipped below the $28.31 support on July 20 but the bears could not capitalize on this weakness. This suggests that bulls are accumulating at lower levels.

The bounce off $26.92 picked up momentum and the bulls pushed the price above the 20-day EMA ($38.53) on July 24. This is the first indication that the bearish sentiment could be ending. The 20-day EMA has flattened out and the RSI has risen to the midpoint, which also suggests that the selling pressure could be easing.

If bulls drive the price above the 50-day SMA ($47.33), the ICP/USDT pair could rise to the overhead resistance at $59.42. A breakout and close above this resistance will complete a double bottom pattern, indicating the start of a new uptrend.

The pattern target on the upside is $90.53. This positive view will invalidate if the price turns down from the current level and breaks below $26.92.

Both moving averages have turned up on the 4-hour chart and the RSI is in the positive zone, suggesting that bulls are in control. The buyers are likely to defend the 20-EMA on the downside.

If the price rebounds off the 20-EMA, the pair could rise to the psychological level at $50. This level may act as resistance but if bulls do not give up much ground, the up-move may continue and the pair may rise to $59.42. Conversely, a break below the 20-EMA could pull the price down to the 50-SMA.

Aave rebounded off $212.54 on July 20 and rose above the horizontal resistance at $280 on July 23, which suggests strong buying at lower levels. The price is currently stuck inside a symmetrical triangle.

The moving averages are on the verge of a bullish crossover, indicating that bulls are attempting a comeback. If the price rebounds off the moving averages, it will suggest a change in sentiment from sell on rallies to buy on dips.

A breakout and close above the downtrend line will complete the symmetrical triangle pattern. The AAVE/USDT pair could then rally to $347.53 and later to $400.

On the contrary, if bears pull the price below the moving averages, the pair could again gradually slide to the support line of the triangle. A break below the triangle may turn the tables in favor of bears.

The bulls are facing stiff resistance at the psychological level at $300 but if they do not allow the price to sustain below the 20-EMA, it will increase the possibility of a break above the downtrend line. If that happens, the pair may move up to $347.53 in the short term.

Alternatively, if the price sustains below the 20-EMA, the pair could drop to $268 and then to the 50-SMA. A strong bounce off this level will indicate buying on dips. The bulls will then again try to push the price to the downtrend line. A break below the 50-SMA will signal that bears have overpowered the bulls.

Related: Powered by the people: 3 altcoins whose tweet volume spiked before a strong rally

Terra protocol’s LUNA token has bounced back sharply from $5.58 and reached the overhead resistance zone at $7.96 to $8.72. The bears had halted the previous recovery attempt by the bulls in this zone on July 11.

If bulls push the price above $8.72, the momentum could pick up. The gradually rising 20-day EMA ($7.03) and the RSI above 59 suggest the path of least resistance is to the upside. The LUNA/USDT pair could then rally to the downtrend line.

This level may again act as a resistance but if bulls do not give up much ground, the pair could attempt to break above the downtrend line.

This positive view will invalidate if the price turns down from the current level and breaks below the 20-day EMA. Such a move will indicate that buying dries up at higher levels. The pair could then drop to $5.58.

Both moving averages on the 4-hour chart are sloping up and the RSI is in the positive territory, indicating that bulls have the upper hand. If bulls can sustain the price above $7.96, the possibility of a retest of $8.72 increases.

If bulls can drive the price above $8.72, the short-term uptrend may pick up momentum and the pair may rise to $10. This level may act as resistance but if bulls can flip $8.72 to support, the uptrend may continue.

Contrary to this assumption, if bears pull the price below the 20-EMA, it will suggest weakness in the short term. The pair could then drop to the 50-SMA.

The views and opinions expressed here are solely those of the author and do not necessarily reflect the views of Cointelegraph. Every investment and trading move involves risk, you should conduct your own research when making a decision.