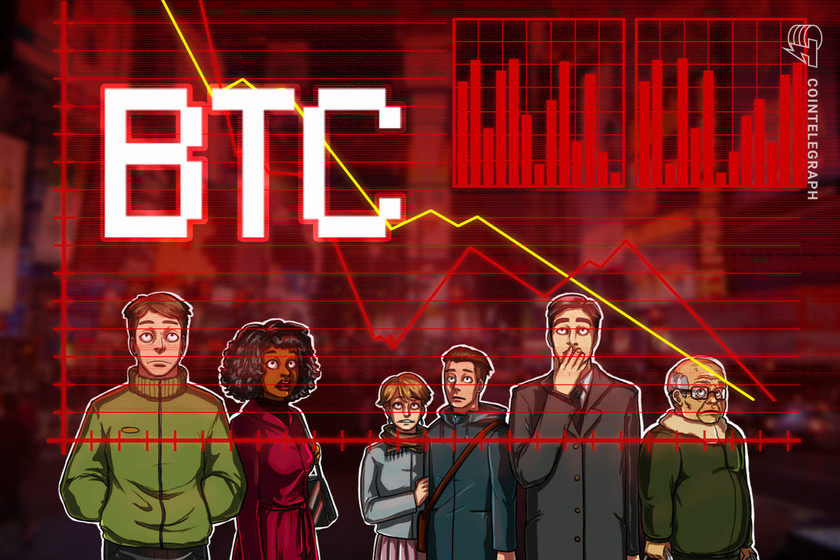 Bitcoin dropped closer to a key support level and the Dow and the S&P 500 pulled back after the Federal Reserve moved forward its plan for 2 interest rate hikes in 2023.

The decision comes as economists worry about rising inflation in the United States and Powell said that the Fed had raised its inflation expectation from 2.4% to 3.4%. While Powell described the current inflation spike as “transitory”, consumer prices are at a 13 year high and analysts worry that rising inflation will impact the post-covid economic recovery.

Powell did not directly address whether, or when the Fed would begin tapering its $120 billion monthly bond purchases but the decision to begin raising rates in 2023 suggests that the program will see cuts way in advance of 2023 in order to be carried out in a moderate fashion.

On June 15 Bitcoin price successfully completed its bullish inverse head and shoulders pattern (4-hour chart), but fell short of the $45,500 target after hitting resistance at $41,350.

While the price has slipped below $40,000 and failed to flip the level to support, analysts are viewing the current price action as nothing more than range-bound trading and at the time of writing, $38,300 looks like a lower support retest.

With less than 3 hours before the daily close, traders will likely look for BTC to hold above the 20-day moving average near the $37,000 level which is expected to function as support.

One thing to note is the steady inflow of BTC to major exchanges and an increase in miner outflows over the past few days as data from CryptoQuant suggests that Bitcoin inflows lead to bearish outcomes.

The 50- and 200-day moving averages are also en route to converge, possibly forming a bearish ‘death cross’, but both are lagging indicators, meaning they are not entirely reflective of spot price action. Nevertheless, both moving averages could present considerable resistance for bulls.

Alpha Finance Lab (ALPHA) rallies 50% as project fundamentals improve
Got crypto? Here are 3 software wallets for storage, staking and swapping
Bithumb to ban employees from trading crypto on its platform
The new HM Treasury regulations: The good, the bad and the ugly
What is Harmony (ONE) blockchain and why it is getting so much traction?
Post Views: 212