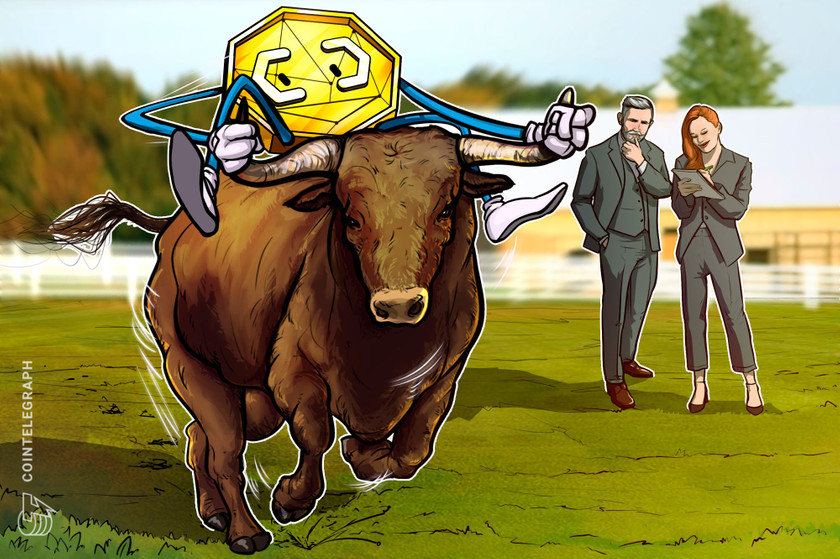 Attractive yields for stakers, protocol revenue and competition among DeFi protocols have analysts pointing to a bullish long-term view for Curve Finance.

Choppy markets after a major pullback offer ample time to take a survey of the cryptocurrency landscape and find solid projects with improving fundamentals that have caught the attention of analysts and tokenholders.

One project that has piqued the interest of many, including researchers at Delphi Digital, is Curve Finance, a decentralized exchange for stablecoins that focuses on providing on-chain liquidity using advanced bonding curves.

Three reasons why Curve DAO Token (CRV) is attracting the attention of analysts include attractive yields offered to tokenholders who participate in staking, competition for CRV deposits on multiple decentralized finance (DeFi) platforms and healthy earnings for the Curve protocol as a whole despite the market downturn.

The root source of analysts’ bullish point of view comes from CRV’s attractive yield when staking the token on the Curve platform as well as other DeFi protocols.

Users who opt to stake their tokens directly on Curve Finance are offered an average APY of 21% and are given vote-escrowed CRV (veCRV) in exchange, which allows participation in governance votes that take place on the protocol.

Vote-locking CRV also allows users to earn a boost of up to 2.5 times on the liquidity they provide on Curve.

The amount of CRV tokens being locked in the protocol for governance was originally projected to have surpassed the total token issuance by the end of August 2022, but this estimate has since been moved forward thanks to an increase in demand for CRV deposits following the launch of Convex Finance in May 2020.

If the current pace continues, the rate of lock-up will have surpassed issuance by the end of August 2021.

This could potentially lead to upward pressure on the price of CRV if the daily demand continues to rise while the available supply decreases, making for a bullish long-term case for the price of CRV.

Curve Finance has emerged as one of the cornerstones of the DeFi market thanks to its ability to provide stablecoin liquidity across the ecosystem while offering token holders a less risky way to earn yield.

Due to its rising importance, demand for CRV and the governance power that comes with it have increased among DeFi platforms that have integrated Curve’s stablecoin liquidity.

The two biggest contenders for CRV liquidity outside of the Curve platform are Yearn.finance and Convex Finance, which together control roughly 29% of the veCRV supply currently in existence.

Demand for more CRV deposits has led to a battle between these two platforms as each of them attempts to offer the most attractive incentives to lure CRV holders, with Convex currently offering an APY of 87%, while Yearn offers stakers a return of 45%.

Related: Altcoin Roundup: Stablecoin pools could be the next frontier for DeFi

This demand from DeFi platforms, in addition to the Curve Finance protocol, puts further pressure on the circulating supply of CRV and is another piece of data to take into account when evaluating the long-term outlook for CRV.

A third factor catching the attention of analysts is the ability of the Curve Protocol to generate revenue in both bull and bear markets as the demand for stablecoin liquidity continues regardless of whether the market is up or down.

Almost forgot! Fee distribution time is up. Special thanks to @synthetix_io for their awesome fee sharing program: almost $400k came from it! pic.twitter.com/pjF1UIFGiK

According to Delphi Digital:

“Curve is one of the few DeFi protocols that has earnings (i.e. protocol revenue) with a healthy trailing 30d P/E of ~39.”

On top of continued revenue growth, the stablecoin component of Curve has helped shield the platform from the sharp decline in total value locked (TVL) seen on most DeFi platforms. Currently, Curve’s $9.34 billion in TVL makes the protocol the top-ranked DeFi platform in terms of TVL.

The resilience of the protocol’s TVL combined with the ability to generate revenue from staked assets and the growing competition for CRV deposits by integrated DeFi platforms are three factors that have caught the attention of cryptocurrency analysts and have the potential to lead to further growth of the stablecoin-focused protocol.